Mess free creative play – is there such a thing?

Mess free creative play – is there such a thing?  Oh yes!  We have discovered a gem thanks to the lovely people at Learning Resources.

It’s called Play Foam and quite simply it is any parent’s dream – it provides kids with a play material that they can squish, shape, pull apart, mould again and again and there is no mess to clear up at the end of play time.  Honestly, it is that good in my opinion.  The set we received has 8 different colours, some with added sparkles. 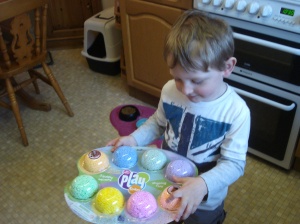 It’s not sticky but has a wonderful texture, you can play with it on any surface and won’t leave a residue – we tested that out on lino, a wooden table and our Living Room carpet.  Playfoam is aimed at children aged 3-11 years, but I actually think that should be extended to at least 45 years!  I’ve enjoyed playing with it as much as Monkey has!!

You don’t need to worry about any nasties – it is non-toxic, so totally safe for children to play with it.   I tried to get Monkey to keep all the colours separate, but what does a Mummy know – he quite happily combined all the colours together (only downside – you can’t really separate them back) and it has made no difference to his enjoyment.

We’ve been talking a lot about mini beasts lately so we made butterflies and snails ….

http://www.over40andamumtoone.wordpress.com getting creative with Playfoam

We’ve played with the Playfoam a lot over the last couple of weeks.  It feels the same to touch and mould today as the day we opened the packet. The texture just makes Monkey (and me) want to play with it, squish and squash it, roll it out into sausages, roll it up into balls, make it into all sorts of objects.  As with most things in this house the Playfoam becomes an integral part of Monkey’s construction world – everything becomes rubble or building material here!

Tomorrow he’ll be back to making caterpillars with it.  We’re going on a long car journey tomorrow and I’m going to put some of the Playfoam in Monkey’s car tidy so he can play in the car.  He’ll have fun and I won’t have to worry about any mess in Daddy’s leather upholstered car!  One happy, harmonious family 🙂

A little video of Monkey having fun with his Playfoam …..

This combo pack of 8 Playfoam colours is available through Learning Resources and retails at £9.00 (2013 price).  We’ve had loads of fun with this product already, it’s totally different from anything else we have and I would definately recommend it – worth every penny.

disclaimer: we were sent this product for the purpose of review, our comments however, remain our own honest thoughts

I'm an over 50 mum to one, sharing my adventures with my 11 year old son
View all posts by over40andamumtoone →
This entry was posted in Arts and Craft, Family life, Reviews and tagged colours, fun, imaginary play, Learning Resources, making, moulding, My monkey, no mess, Playfoam, sensory play, squashing, tactile. Bookmark the permalink.